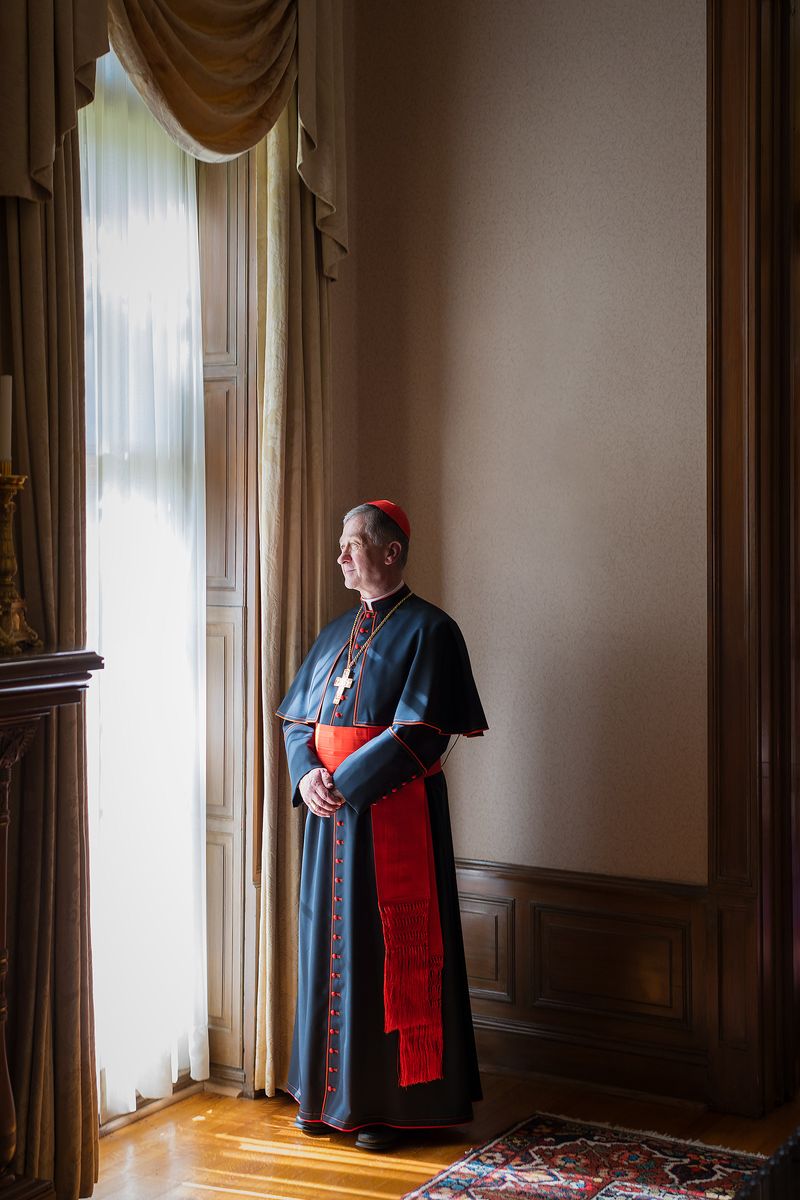 In the fall of 2016 I was asked by longtime client Bart Crosby to do a portrait of Blase J. Cupich, the Archbishop of Chicago, who had recently been elevated by Pope Francis to become a Cardinal. The photograph was to be the official portrait of Cardinal Cupich for the archdiocese, with prints of various sizes hanging in churches and schools. Years ago I’d had the opportunity to photograph Cardinal Bernardin for a book project and, later, Cardinal George for The New York Times Magazine, but the thought of doing the official portrait gave a little extra pressure to get it just right.

I wanted to know: what had been done in the past for these official portraits? The Archdiocese showed me some prior examples, but they seemed out of date in terms of providing any real guidance. The portrait needed to feel timeless, yet relatable and real.

We scouted several possible locations and decided that the 1880s Gold Coast mansion, the traditional residence of Chicago’s Archbishop, would provide enough room to set up a simple background as well as provide rich and interesting rooms to shoot some more editorial-style portraits. The date was set and details were prepped. Assistant Kevin Serna and I were originally supposed to arrive at 7am to start setting up but we got a call pushing the time back a few hours; very late the previous night the Chicago Cubs had inexplicably won the World Series(!) and everyone, including the photo subject, was tired.

It was a beautiful, sunny morning and everything went well on set. Cardinal Cupich seemed in good spirits and was very patient with the process.

I was subsequently asked whether it was possible for me to document the actual consistory ceremony at the Vatican, where Cardinal Cupich and twelve others would make their new designation official. Travel plans were made. I found myself very early on a Saturday morning going through an X-ray machine with my equipment at the press entrance on the edge of Saint Peter’s Square, alongside hundreds of other members of the news media from around the world. From there we were grouped en masse outside the basilica awaiting further instructions. After about an hour, as it had just started to drizzle, I heard a familiar voice: “Thomas, follow me.” It was Fr. Manuel Dorantes, whom I had met the previous day — who previously had worked at the Vatican Press Office and was known on Twitter as @TweetingPriest. He was part of the small group of Chicago-based priests assisting Cardinal Cupich on the trip and he knew I’d need some extra help getting positioned in a strategic spot to get the best shots.

He led me through a few checkpoints and along the perimeter of the basilica until he handed me off to a colleague. His last words to me were: “remember to choose the right side,” which I took to mean the right-hand side of the church. But I was led into the church via a side entrance and I found myself near the altar wondering: did Fr. Manny mean right-hand side as viewed from the altar or from the pews? My guide only spoke Italian and pointed at the one side, then the other, and shrugged his shoulders. St. Peter’s has two relatively close-in vantage points for the media nestled between fortress-like walls and pillars, each holding 15-20 photographers/videographers and each symmetrically opposite the other. Since I truly had no idea at that point which side was the correct strategic side, I chose the side that was less crowded. I settled into a spot and pulled my camera and lenses out of my backpack to get ready.

I quickly started to realize that these plum spots were usually reserved for the Italian press, the regulars, the professionals! There were other media-only areas but they were much further back. I was awestruck by St. Peter’s itself, which I hadn’t seen in many years, awestruck by the sea of red crimson robes and birettas, the pageantry, the Pope! But also catching my attention now was the unbelievable display of high-powered Canon and Nikon glass around me. My camera was going to be fine but I was seriously outmatched with my lens choices. But they would still get the job done — even provide more context because I wouldn’t be zoomed in so close, I told myself.

The ceremony was about twenty minutes in when, over the hushed formality of the moment I heard: “Thomas… Thomas…” in an Italian-accented whisper. Someone nudged me on the shoulder and I looked up to see one of Fr. Manny’s colleagues waving for me to come over. I felt like I was having an out-of-body experience for the second time that day. The thousands in attendance inside the church had been locked in position for more than an hour. In this highly formalized environment, everybody seemed frozen in space and time and all movement was minimized. But I gathered my gear and was on the move. “You’re on the wrong side,” he whispered when I got closer. “Follow me.”

So I followed him, as quietly and inconspicuously as possible, down a hidden nearby staircase, through a lower level passageway under the church, and up the matching stairway on the opposite side. He carved out a spot for me and said, “Fr. Manny noticed you were on the wrong side.”

I thanked him, and got ready to shoot. Yes, this side was going to be better.

Fr. Manny had one-hundred things to do that day. I’m just thankful he was able to manage one more. The pictures were beautiful!